You can find a whole library of my RPG goodness on at your local gaming store and DriveThruRPG. 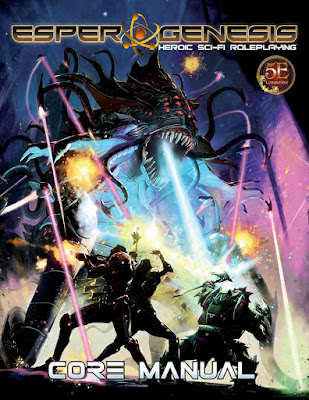 Brace Yourself for High Adventure in Hyperspace as Sci-Fi comes to 5th Edition!

Galaxies at war, high-tech gadgets and weapons, robots, aliens, starfighters, and ancient machines with the power to shape reality - All of these make the core of Esper Genesis, powered by the 5th Edition rules of the world's greatest roleplaying game. Taking on the role of a galactic hero, you can forge your destiny within a universe of advanced technologies and hidden mysteries.

Esper Genesis is designed with an infinite universe in mind, powered by the 5th edition rules of the world's greatest roleplaying game. If you've played any 5E game, you already know how to play Esper Genesis.  Though the system is easily integrated into any 5E setting, it is also a standalone product. You do not need the D&D rulebooks or any other 5E product in order to play.
This product contains:
Remember to pick up your free download of the official ESPER GENESIS CHARACTER SHEET and the GAME MASTER BASIC RULES, which include sci-fi threats, special item enhancements, and setting development aids. Average Rating (3 ratings)
Mortal Fantasy: Gods of the Fall
Now you can do your own traditional RPG fantasy spin using the Cypher System for your favorite fantasy RPG world or Monte Cook
Games’ own Gods of the Fall setting - become a Doomed Paladin who Wears A Halo of Fire, a Gnome Adept who Explores Dark
Places or a Fast Thief who Works the Back Alleys with their Goblin Crew.
Discover a dark and dangerous world, Gods of the Fall, a land where there are no gods and even less mercy.
This 45-page PDF includes:
Gods of the Fall, is a world that desperately needs mortal heroes until the new gods come into their own.  And while you hope these
godlings will be better souls than the slavers and witch queens that challenge you now -- there are no guarantees.
"This is a great supplement for the Cypher system and also the Gods of the Fall setting. If you are wanting to use the light and simple
Cypher system in a traditional fantasy setting with a sprinkling of the tropes then this PDF does much of the hard work for you. You'll
be up and running pretty much straight away. ... Thre are links back into the Gods of the Fall setting, but if you are looking to simply
kick out to your favourite fantasy setting then you have most of the bases covered, leaving you to build further from there. A short
adventure rounds out this PDF and I really like the adverseries as presented. Formatted and put together to very high standard, this
is a 'must have' for Cypher system players." -- Worldplay Games

Download Mortal Heroes now and get ready to teach these new gods a new level of respect for mortals!
Requires the Cypher System Rulebook from Monte Cook Games. Full‑size Preview
.
Cruel Stars: Characters does double duty; giving you tools to create your own Space Opera PCs while also giving you a brand new
Space Oprea universe.
The world of Cruel Stars was designed from the ground up to mesh with the Cypher System to embrace cyphers and skills in new
ways, and with atittude. Meet your new neighbors on Terra like the Octopods and the Chumps. Or use their species Descrptors for
the psionic and tech-savvy races in your unique (or homage style) Space  Opera game.

It's a universe of secrets, danger, power, heart and most of all, attitdue. Cruel Stars is ready for you, are you ready for it?
This 17-page PDF includes:
Requires the Cypher System Rulebook from Monte Cook Games Average Rating (1 rating)
Naphtha:Islands on Fire
Welcome to your new playgroud, Naphtha: Islands on Fire.
A new world built from the ground up for the Cypher System that can stand alone or be dropped into your current campaign. Armed with Genre
Friendly tips on how to tweak the world for Steampunk, Lovecraftian and SciFi, your crew could explore new lands every week in this modular setting.
(Keep what you want, what you don't want never gets discovered.)


And even far too many more to list here.